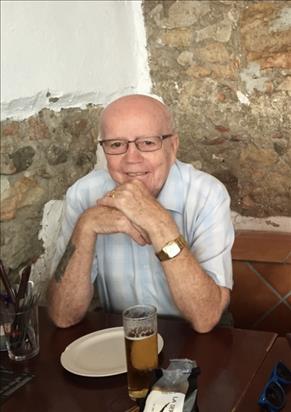 Known as Rudy to his family, Pat to his friends, Patricio or Patri to his Spanish friends, Dad, Grandad, and his favourite: Big G!

Born the 4th of 10 children in Windlesham, Rudy loved his big Irish family. He became interested in travelling the world from a young age.

From National Service, Rudy joined the Royal Engineers hoping to see the world. He served in Suez and Borneo and was stationed in Malaysia, Germany and Gibraltar. He started boxing, much to the horror of his mother, and became three times army and combined services welterweight champion. Whilst stationed in Gibraltar,he met his wife Pepi, just over the border in La Linea and they were married for almost 60 years. He remained in the army and eventually applied for his same job as a civvy.

Rudy had a passion for languages and at last count could speak eight, including Spanish, German, French, Arabic and Gaelic. He was most recently learning Portuguese. He felt it was respectful to talk to people in their own language as much as he could and put it to good use, translating for the army when required. he taught Spanish at a night school alongside his employment with the army before retiring to Spain with Pepi.

Rudy was well loved and respected to all who knew him. He was the best Dad and Big G we could have asked for. His daughters Karen and Carmen chose the British Legion to donate to in his memory. He had so much respect for the army and would want to support this organisation to continue to their good work.