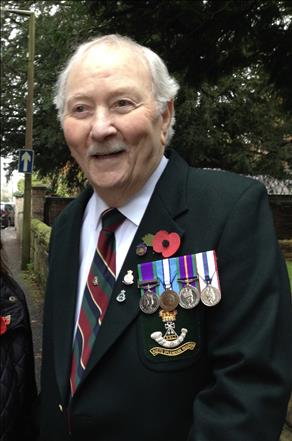 Mr Ronald Richards (Ron) was a loving dad to Monique and grandad to Oliver, Ranulph and Anton. He was very lucky to have travelled to some amazing places during his long time in the KSLI (Kings Shropshire Light Infantry) including, Germany, Malaysia, Cyprus to name a few His daughter often loved to listen to the bugler while she was with him as a small child at the army bases. He loved being In the army and often spoke about his time there.

He was very happy during his posting in Cyprus and actually went to live there for a while when he retired and lived in the Arsenoe Beach Hotel. He became great friends with Micheal, who owned a bar next to the hotel. The local people fondly called him Mr Ron. He was very proud when Emma, Susan, John and family went over to visit him and he could show them where he was based during his time in the army. He even took them to the part of Cyprus- Turkey border where he served as part of the UN (United Nations) He was extremely proud to have served in the army.