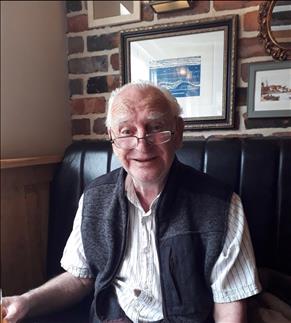 Sadly, Bob passed away on 22nd January 2021 and will be greatly missed by his daughters, their families and many friends.

Bob was well known in the Maldon community having lived there for almost 40 years. He worked as a printer in Heybridge and a barman in The Carpenters Arms in Maldon. He was the cantankerous Scotsman that hassled all and sundry to put their money into the Christmas club he ran - I think all were grateful when December came round!! He loved playing dominoes and played in the Carpenters team.

Most will associate Bob with whizzing around on his mobility scooter, going 'up the town' as he used to say, usually on his way to Greggs for 2 sausage rolls and a cup of tea!

He was obsessed by anything to do with the Armed Forces and would have loved something as practical as this Tribute Fund. He was proud to be able to go up in a Tiger Moth, not once, but twice as 70th and 80th birthday presents. He truly swaggered back in his flying jacket after the flights!!

He will be greatly missed by all who knew him - at last he is at peace.