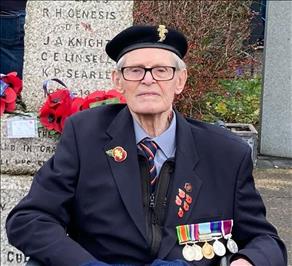 Dad was born to a military family in Malta in 1928 and spent a happy childhood in London. In 1939 he was evacuated to Kent where he spent most of the war allegedly 'safer' but with The Battle of Britain raging overhead!!

He joined REME at the Army Apprentices College, Beachley, Chepstow in 1943 then served in Korea, Singapore and WSMR, USA before moving into civilian life.

He enjoyed retirement for many years travelling around Europe and spending hours in his garden creating stunning floral displays.

He became actively involved in Beachley Old Boys Association (BOBA) attending many reunions and proudly represented them at the Remembrance Day services at the Cenotaph.

He was a loyal member of The Royal British Legion raising funds for the annual poppy appeal for many years.