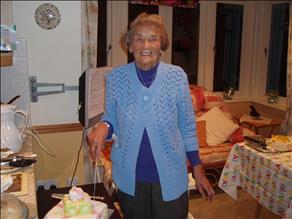 Frances was a Mother, Nan, Great Nan, Auntie, Cousin and loyal friend to so many people who she regularly kept in contact with. She met Les, her husband, at school, where they were friends but their friendship didn't blossom into a love affair until they were late teenagers. She led a very active and varied life, enjoying her long career as the Company Managing Director's Secretary at Gallaher Tobacco Industry. She and Les would attend many Company Balls, all dressed up in 'posh frocks' and black bow ties, where they would show off their talent on the dance floor - the Foxtrot being their favourite. At Gallaher, she was a top table tennis champion, winning many cups + shields in singles and doubles. She coached the ladies' netball team to victory and played in the Company Darts Team. With

Les, they travelled the globe plus enjoying family holidays to holiday camps, where she usually won accolades in various sports and pastimes, making firm friends with regular visitors to meet up year after year. Frances and Les also enjoyed camping in the New Forest, where Ken can remember washing in the puddles - before the days of shower and toilet blocks. They later bought a Camper-van and spent a lot of time travelling round the country during their retirement. They went on many cruises, which she continued to do after Les died, travelling with various members of her family right up until she was 95. She was an active member of the Co-op Women's Guild and also the R.B.L. where she yearly organised local members for the Poppy Appeal, a mammoth task of where + when to place people for selling Poppies. This she did until she was 94. Frances was also a supportive Nan, cheering on at Sports Days, supporting all activities and entering into competitions at the annual School Fetes. Besides all this, she and Les hosted many family and friends gatherings complete with food, the current dance trend, jokes + hilarity. Christmas meals were mostly followed by game of Uno, played by adults and children alike, and very often a game of hunt the thimble, a favourite with the kids. She loved gardening and her knowledge of flower species was amazing, with flowers in the home playing a vital part of her life. There was nothing Frances liked more than a trip to the shops to buy new clothes - seeking out bargains if at all possible. Living in Swanley, she enjoyed visiting the weekly market where she bought many bags, handbags and scarves with a view to match an outfit in her wardrobe. She had a good 'eye', and was always very well 'turned out'. She managed to celebrate her 100th birthday and thoroughly enjoyed seeing people, some of whom she hadn't seen for a long time, but still remembering who they were and listening to all they were getting up to, with interest. In the 11 days following her Centenarian Celebration, we all reminisced frequently about the day and other poignant memories, raising a smile and a few comments from her. Gone, but certainly never to be forgotten.