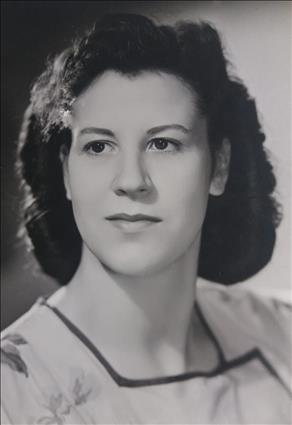 Eileen made friends wherever she went, curious and interested in other people and always taking the time to talk. Had she been born a generation or two later she would have backpacked the world, but she still managed to see so much of Europe, shunning the beach scene to explore and meet people. As her own exploring days finished, she delighted in others' adventures or hearing about the home lives of the many international nurses and carers that she got to know in her later days. And she could always reminisce, talking about everything from seeing Pompeii for the first time to pressing grapes with her feet in Corfu, where the best ice-cream shop is in Rome to climbing an Austrian mountain in improvised snow 'shoes' made of plastic bags and sandals.

Yet family was at the heart of who Eileen was, offering so much love and support (and just a little bit of her temper...) to her children and grandchildren. How she delighted in family gatherings, reveling in fun and games and invariably ending up laughing so hard her teeth would be falling out. As a mark of respect, the bag of old headgear and grey knickers that she kept for 'the hat game' has been permanently retired...

And, of course, there was her beloved Ron. Apart for over fifty years, she still said goodnight to him at the end of every day and took comfort in her belief that he was watching over her.

How lucky we were to have had her for so long, how much she gave to us all, and how we will miss her.

Eileen had long supported the British Legion and would be honored that donations made in her memory are going to a charity that meant so much to her.